This pudding has all the wonderful flavours of Christmas! Ginger, Cinnamon, dates and nuts, all layered into a 15-minute pudding! This is a great make-ahead when the oven is full and you need an easy scrummy dessert!

Place the dates in a bowl and cover in boiling water to soften. After 5 minutes, drain and roughly chop into smallish pieces and set aside.

Melt a knob of butter in a large non-stick frying pan. Add the ginger cake cubes and fry on medium heat for 3 minutes turning regularly. Set aside and they will crisp a little as they cool.

Place the cream in a mixing bowl and sieve in the icing sugar and cinnamon.

Use a hand whisk to blend for about a minute, until it’s combined and you have soft peaks.

Line up your glasses (they will need to be around 1/2 pint) and start layering.

So that they are even, do a layer of ginger cake pieces in all of them, followed by a cream layer in all of them, then a few dates and a sprinkling of nuts. Continue to layer until all of the ingredients are used up. Try to end on a cream topped with a nuts layer at the end

Cover and place in the fridge until needed! 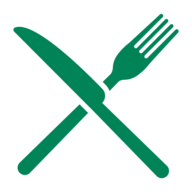